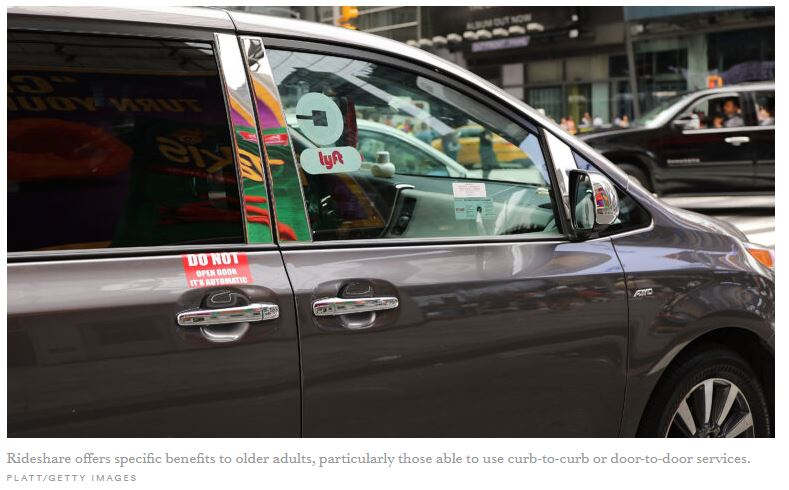 Ridesharing can help older people be functionally independent in their homes, communities

Ridesharing can help older people be functionally independent in their homes, communities

The United States has experienced a particularly rapid period of expansion of the older adult population since members of the baby boom generation began entering older adulthood nearly a decade ago. An aging population is the inevitable result of the steady advances that have been made in health innovations, medical research and discovery, and public health initiatives.

But for many older adults — a population projected to increase to 80.8 million by 2040 — the reality is that aging co-occurs with gradual decreases in personal freedom and autonomy.

Equitable access to services and support including nutritious meals, high-quality health care, and opportunities for social and intellectual engagement are central to remaining functionally independent in the home and community. Mobility, the ability to maneuver in the home and community, is another essential aspect to maintaining functional independence. As adults age and increasingly rely on options other than driving themselves places, transportation can be a rate-limiting factor for achieving desirable societal and health outcomes.

An emerging social determinant of health

The need to travel persists over one’s lifetime — with 80% of adults age 65 and older maintaining an active drivers’ license. Yet the ability to drive — the most frequent mode of transportation — decreases with age, as does the ability to use other modes such as public transit or long-distance walking. Importantly, transportation difficulties can have harmful outcomes that include increased feelings of isolation, earlier entry into nursing facilities, and increased burden on caregivers.

In the past decade, transportation services — coupled with the advancement and scaling of mobile smartphone technology — have emerged that are particularly well-suited for older adults experiencing age-related declines in the ability to use available modes of transportation. These services can help people remain functionally independent in their homes and community.

Ridesharing occupies a unique niche in the transportation ecosystem. Rideshare models of transporting people in privately owned automobiles have existed since production of the Model T began in 1908. After a century of ebb and flow, the marriage of rideshare services with the connectivity of the smartphone — termed dynamic ridesharing — has rapidly been adopted by transportation network companies such as Lyft, Uber, Via, and the like, with an explosion in use.

Unlike public transit, rideshare can provide curb-to-curb service, reducing the challenges of getting to and from a bus stop or train station — termed the “last mile problem.” Some transportation network companies even offer door-to-door assistance.

Rideshare is available on-demand rather than on a pre-set schedule, as public transit offers. It also provides direct point-to-point transportation, unlike paratransit — supplemental public transit services for individuals who are unable to use fixed route bus or rail service — which can detour to pick up and drop off other users, lengthening the ride. In addition, rideshare does not need to be scheduled days in advance as does conventional paratransit, and it does not require a traveler to have a car or be able to drive.

Rideshare offers specific benefits to older adults, particularly those able to use curb-to-curb or door-to-door services. This makes it a viable option for — according to a representative sample of older adults age 65 years and older from the Health and Retirement Study — the 24% of older adults who do not have access to a vehicle, the 21% who reported that they are no longer able to drive, and the 52% who say they no longer drive long distances (the percentages overlap). Moreover, ridesharing can remove some of the need for travel, particularly germane for homebound older adults, by delivering goods such as groceries, meals, or prescription medicines.

As an on-demand transportation option personalized to travel precisely from to precisely where one needs to go, rideshare is considered such a central component of transportation that Medicaid supports using this mode to get patients to and from routine medical care in 17 states and the District of Columbia.

Separate from the hypothetical benefits provided by rideshare is evidence that older adults are aware of rideshare’s potential to improve their quality of life. In surveys, older adults reported uncharacteristically high opinions and willingness to pay for technologies that support or replace driving when compared to other advanced technologies such as computers or assistive robots.

Demographic trends, design features, and technological demands suggest that while rideshare services offer benefits for older adults, barriers persist to its adoption and sustained use in this group. A 2018 Gallup poll revealed that — of all age groups surveyed — adults age 65 years and older report the lowest usage of rideshare (13%), though this marks an improvement over prior years. In 2018, 24% of adults age 50 years and older had used a rideshare service — an increase from 7% in 2015. The percentage of lower-income adults to have ever used rideshare also increased in the same time period.

Aside from age characteristics of riders and previous users, little else is known about the demography of rideshare users, particularly in the higher age range. According to the 2017 National Household Travel Survey (conducted between April 2016 to May 2017), within the 2% of older adult respondents who reported using rideshare in the 30 days before completing the survey, the likelihood of having used rideshare decreased with advancing age, poorer self-reported health status, lower income, and living in more rural residential settings. Such groups face barriers to rideshare access.

One recent, noteworthy study in which older adults were provided with three months of free and unlimited access to rideshare, 90% of participants reported increases in quality of life and 80% indicated they intended to keep using rideshare services. Among the 20% of participants who said they would not continue to use rideshare, cost was listed as the main deterrent.

It is possible to improve the physical accessibility of vehicles, particularly through universal designs promoting usability by all, regardless of ability or disability. Even in conventional vehicles, modifications can be made to facilitate use, like installing grab-bars above the door and arm rests on the door to assist in entry and exit.

The contact point between customers and providers is another area ripe for modification that could make it easier for older adults to use rideshare services. It’s important to note that older adults are less likely to own smartphones, which is currently the dominant method of hailing a rideshare provider.